skip to main | skip to sidebar

A (model) light rail is one of the great new props for this year's float (a prizewinner last year). Our environmental future: Coral Sea, renewable energy and public transport.

Posted by CAST Moderator at 11:09 AM No comments:

Like to promote sustainability and become involved in this year’s Festival Cairns Parade on Sunday 21st August? The theme this year is:

The count down is on until the parade, so if you have time, skills or ideas please sign up!

We are looking for:
Ideas
Prop Makers
An MC
Choreographers
Costume designers/makers
Musicians or someone who can put a good musical soundtrack together that will work with our theme
People with vision, time or enthusiasm
Participants to join us on the day
We have 3 wind turbines we used last year which we can use

For more info contact Nicole n.hunter@acfonline.org.au
Posted by CAST Moderator at 10:48 AM No comments:

Environment groups in Cairns are coming together for a joint float in this year’s Cairns Festival Parade with the theme – “A Climate for Change - an alternative vision for FNQ”.

This will be a walking and cycling float.
Hope to see you there.
Gather at Munro Martin Park by 5pm.
Parade walks along the Esplanade to Fogarty Park.
The Theme is GREEN.
Remember this is a festival so be bright, fun, decorate your selves, your bikes and your friends and children!!

INFORMATION ABOUT PARADE DAY
The 2010 Parade route will be the same as last year’s. All float entries must be at the marshalling area in Munro Martin Park from 4pm onwards. (Florence, Grafton, Minnie and Sheridan Streets – see map).

CAST members are involved in a range of activities - including the new Cairns Climate Action Network (Cairns CAN). Together with others we are involved in a joint environment/sustainability float in this year’s Cairns Festival Parade (Aug 21). Anyone interested in being involved in organising the float or participating on the day, please let us know?

CAST meets on the second Tuesday of the month. Contact Jonathan about meeting details Ph 0432384505
Posted by CAST Moderator at 3:25 PM No comments:

Two letters to the editor of Cairns Post about sustainable transport vs the 10 lane highway solution for Cairns.

Southern Access Madness
Why spend billions on a ten-lane southern highway when that is going to take decades to solve the problem, when petrol is going to get prohibitively expensive, when there won't be enough parking spaces, when the city streets themselves are going to be gridlocked and when nothing is done about the already daily gridlock on the northern access road?

This is fossil bureaucrats wasting our taxpayer’s money on dinosaur solutions.
Investing instead in existing but underused rail infrastructure, supported by electric suburban shuttle buses, will give us an efficient, quiet, pleasant and reliable public transport system. People can go for a drink easily, non-drivers and children can travel independently. We can have a tourist friendly city with no pollution, noise or fossil fuel dependency, which we can showcase as a climate-smart model for sustainability.

More lanes on the Bruce Highway and Mulgrave Road will only produce bigger traffic jams and more frustration and road-rage. This 1950s solution to traffic problems is what you’d expect from a road building agency. Cairns needs an integrated transport strategy that doesn¹t bury more land under bitumen or concrete, reduces our dependence on fossil fuels, lowers carbon emissions and promotes a happier, healthier lifestyle for both commuters and those living in the inner suburbs.

We need a public transport system that is a real alternative to car ownership. We need park-and-ride facilities served by light rail or shuttle buses. And what happens at 5-ways? A black-hole to swallow up all the traffic? Large sporting venues (racecourse, showgrounds, Barlow Park, etc) are empty most of the year and could be used as park-and-ride facilities, and there¹s always the old drive-in right at the end of Ray Jones Drive. We need a network of long distance off-road bicycle paths, or traffic-calmed streets with bicycle priority, to make it safer for those already cycling and those considering cycling as a transport option.

We need to be investing now in the options that reduce our dependence on individual car ownership. The Italian government is giving grants to people buying bicycles. More cities around the world are excluding cars from larger areas. Significant amounts of money would be freed up by spending less on cars plus the reduced costs to our health system from a healthier community that cycles and walks more. Car commuting is part of the problem not the solution. 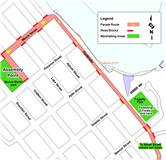 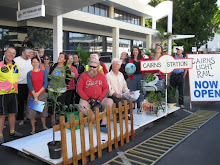 CAST members at May Day Cairns 2008